Squirrels
They're getting closer... 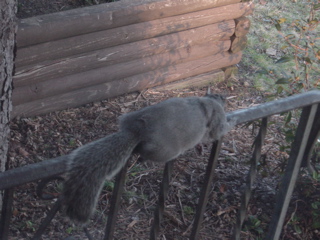 Squirrel stretched out long-ways in desperate attempt to blend in with front rail (hard to do after a pig out of pudding and bread slices.)

I grew up in the country where squirrels scavenged for nuts and scampered around planting oak trees. What's with these Evanston squirrels? Is the north shore rubbing off on them too? OY! Shall we just give in and get them SUVs?

These suburban squirrels are pushy chub-bubbers, I'll say. Figuring out how to eat seed from a bird feeder is one thing... eating from everyone's garbage can, gross as it is, is another.

But leaping onto my side railing, jumping spread eagle across my bug-screen-covered front window, catapulting off of my mailbox and swinging wildly from the Christmas wreath on the front door to hide a crust of bread through winter is just too much!

What ever happened to burying the simple acorn?

How about the convenient holes they've made in the garbage cans? I tried plugging up my hole with duct tape. It lasted for a week maybe. I'll have to try bolting wire mesh across the top. When we hear about the downturn of economy, I suppose one of us could go into business repairing garbage can holes. I mean, I know they have to eat. What bothers me is having them jump out of my garbage can just as I'm about to put something in.

One day when I came home the squirrel was perched on my side railing, daring me to enter my house. He was flicking his tail and clicking. Now I'm no expert, but I had the feeling that, loosely translated, he was saying, "Try it, lady, just try it." He was only five feet from my door and wouldn't budge. I walked closer to the door, he stayed put. A few more steps, his noises got louder. He stared at me, I stared at him. I said, "shoo shoo, go away." He stood firm. I took out my keys and as I got to the door handle, I could hear him behind me, seething, I could feel his eyes burning a hole through my neck.

He was only five feet from my door and he wouldn't budge. What happened to the day when squirrels ran away when humans came around?

How was I supposed to know his food ration was hidden in my Christmas Wreath? It was hidden after all. I didn't see it. Not until March when I took the wreath down and a hard CHUNK of bread FELL on my head!

I was scared to death going into my house. He hissed at me, making these clucking sounds. Imagine what would have happened if his crust of bread had fallen when I opened the door and I had picked it up? Would he have jumped on me and bit my nose? Owch. And how emotionally painful is it, as a squirrel, knowing that twice a day, even more, your food ration might fall out of its hiding place and someone else could seize it?

It also explains how I got the big, horizontal scratch across my front door that boggled my mind for months.

If they scavenged through the trees this wouldn't be an issue. I'm not going to fight him for an acorn.

And then there's the lazy squirrel who fished a piece of bread eight times the size of his head out of my neighbors' garbage can and sat there, eating it and staring at me through my kitchen window. My mom told me staring at them is a sign of aggression. Well, high time I find that out now. I've been trying to telepathically tell him to go eat his bread somewhere away from my window. I thought the old evil eye would do the trick. But no! Not when it comes to rodentia. They give it right back!

Imagine what would have happened if his bread slice had fallen when I opened the door, and I had picked it up, turned around, held it up by my cheek and said, "Is this what you wanted?" Would he have jumped on my face and knocked me over? Would we be wrestling and tussling in the foyer? Certainly I would give him his bread back. But it would be too late. He'd be INSIDE my house! 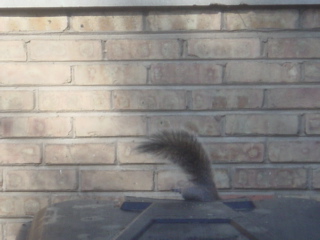 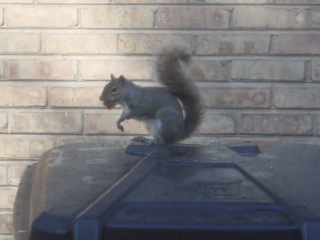 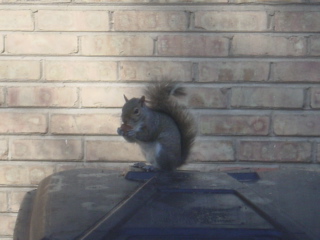 Little Squirrel in action: Posing for photos at the daily all-you-can-eat buffet.

What's to stop him from taking over my life? Would he watch movies while perched on my shoulder and demand that I make popcorn? Would he still forage through my garbage can, or would he make me open the fridge so he could scamper through there?

Or would he make me play music like "The Trees They Grow So High" and demand we go see "The Nutcracker"? Would I have to read him bedtime stories like "Miss Suzy"? Would he demand a bed at night? And what exactly are the hygiene habits of squirrels? Do they shower, might they like to? Would I have to buy extra conditioner? A loofa for small paws perhaps? Ugh. Maybe he would eat the crumbs off of my kitchen floor. That would be a help. Why wipe up crumbs when you can get mice is the old Hindu saying I'm so fond of.

I have to say, I'm disappointed in these Evanston squirrels. They are not espousing any values whatsoever on their young. Thanks to my neighbor's daily garbage of whole slices of fresh bread, the squirrel family that lives in my tree and eats over at the neighbors' buffet has now reproduced. There are at least five squirrels living in my tree. One day when the babies were new I watched them from the window. Poor baby squirrels! They have no role models these days. Their parents were off in garbage can after garbage can, while the little baby squirrels were trying to make a pile of sticks. Only they didn't know whether to put the pile by the tree trunk, or three feet away in a grassy bit. So they went back and forth completely confused, never making one big pile, instead moving sticks from one pile to another. Completely befuddled. But those days are over. They soon discovered, thanks to their parents' fine example, the all-you-can-eat buffet in my neighbor's garbage can. And now it's a constant trail of one squirrel after another. In fact, there is rarely a moment that I look out the kitchen window when there isn't a squirrel sitting on the garbage can.

It's not that I'm a squirrel hater, it's just that if they want to swing on my front door and hang out at my kitchen window, take over my front porch and move into my foyer, basically move into my house and eat my food, then I'd like to put them to work.

Let's all share the chores! You know, I could get them busy with the garden. Tell them where to dig and how much. They're such good diggers. Perhaps I'll have to train them to plant bulbs in the fall, and lettuce in the spring. They would do very well in an arbor setting.

What they don't realize is, being human isn't always so great. I mean, we've got to follow a lot of rules. We've got to pay taxes, we're arrested for vandalism (we can't go 'round putting holes in city property), we've got to clean up after our dogs. I mean, if our dog pees in the neighbor's yard and the spot turns yellow, the neighbor blames it on our dog.

But squirrels, they can pee wherever they want to. There's no "Clean Up After Your Squirrel" rule or "Keep Squirrels out of the Courtyard" regulation or "All Squirrels Must be on Leash" ordinance or a beach that costs a lot more for squirrels than for people.

And another thing, if they want to eat our food and watch TV, they're sure to get pudgy. And if they get pudgy, they won't be able to spring out of the garbage cans as fast, and we run the risk of throwing away our trash while they are actively clawing their way out.

What do you do if a squirrel gets stuck mid way thought the trash can hole? They don't have insurance. And does Senator Kerry feel any responsibility for this nation's obesity, especially since at the end of every french fry is a blob of ketchup?

If I take my issue to city council, will an ordinance requiring squirrels to obtain licenses to eat from garbage cans really take hold? Can we ticket them for eating from cans on the wrong side of the street during certain rush hours? Will the city put a speed bump on the lid to at least slow the pace of garbage can scrounging?

Obviously, these squirrels are above the law. There is nothing I can do. Except perhaps start entering my front door, arms flailing, head swinging wildly too and fro and shrieking weird nonsense sounds to scare the squirrels away before I get to the door. That. Or. I could go in the back door.

PS: I've recently found out that Squirrels are from the Family Sciuridae, which sounds like Scurry Away. At the next city council meeting I propose that we change their Family name to Restinstaie or Whynotmoovinum.

Carry on reading the Archive